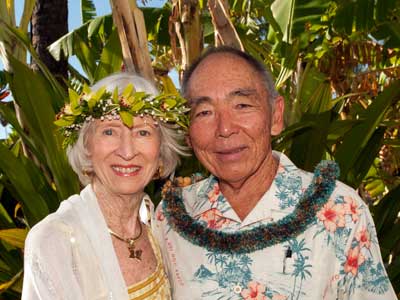 Roy’s grandparents came to Hawaii from Japan, and he was raised on the breathtaking island of Maui. Betty grew up in Buffalo, New York and the two met in 1975 when she was visiting the island. A year later in 1976, the two were married and Sakamoto Properties was founded promptly after. Since its creation, the company has become a successful and well-known entity throughout Maui and the rest of the state of Hawaii.

Both Betty and Roy had been pursuing their careers in real estate before they met, and through the years they have worked with international clients, celebrities and other individuals of distinction. Roy has even had the honor of being named Realtor of the Year by the Realtors Association of Maui.

Betty and Roy have pledged their support to Hale Makua, a non-profit in the Maui community which specializes in providing compassionate health services. Both are also active supporters of Lahainaluna High School and Maui Preparatory Academy, a local non-profit school in West Maui. Their passion for charity work has earned Roy the title of Humanitarian of the Year by the Maui Chamber of Commerce.

This dynamic duo’s passion for Maui real estate is rivaled only by their love of the island and their devotion to furthering the health and success of its many diverse communities and residents.